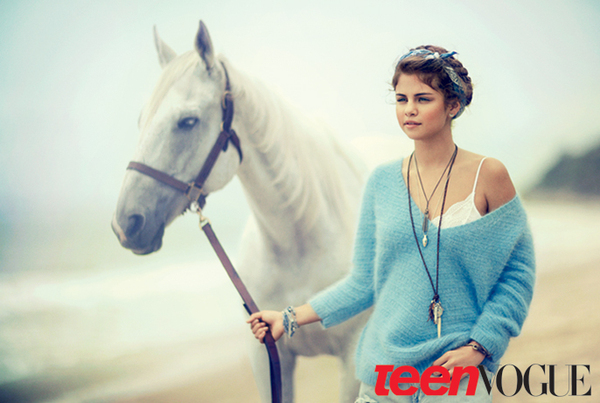 one direction: up close with selena gomez

Shes a mini mogul with an acting and singing career, a perfume and fashion line, and a supernova boyfriend. So what more could Selena Gomez want? As it turns out, a lot.

The road to the Malibu beach house where Selena Gomezs Teen Vogue cover shoot is under way is so steep and winding, it requires an army vehicle to maneuver down it. Even the "Stealth" Range Rover belonging to a certain Justin Bieber is parked atop the hill alongside the rest of the casts and crews. Waitwho? Given that Selenas jam-packed itinerary for the next two weeks alone sees her zigzagging the globe for commitments in Los Angeles, Toronto, Cannes, and Atlanta (and thats just her schedule), it makes sense that she has to be somewhat creative when it comes to carving out personal time, even if it means having her boyfriend on set. Of course, between the photographer, stylist, editors, and assistantsnot to mention the paparazzi-wielding helicopters circling overhead throughout the dayprivacy is all relative. Welcome to the world of a teen mogul and half of one of the most famous couples on the planet.

Fast-forward 24 hours: Selena and I are scheduled to meet at a low-key coffee shop in Encino. Not wanting to keep the superstar waiting, I arrive 20 minutes early. As Im catching up on e-mails, Selena quietly scoots into the booth next to me. No bodyguard. No Bieber. No entourage. No paparazzi. Not even a drop of makeup. Shes ten minutes early and so inconspicuous that no one else in the restaurant so much as looks up. Selena is wearing a billowy Rebel Yell tank and Bebe shorts with one of her signature boho scarves wrapped loosely around her neck. She has a baby face and orders a hot chocolate.

After making small talk about what she wore for the shoot ("It was really comfortable. It probably described my style more than any shoot Ive done") and what she did after it wrapped ("We went to the house, made tacos, watched TV, and lounged"she wont address Bieber by name, but one can safely assume who the other person in "we" is), she dives into the subject of her career. Selena declares 2012 the year of movies. Shes filmed three: Spring Breakers, an indie drama; The Getaway, an action flick; and Hotel Transylvania, an animated comedy. Each is a marked move away from the tween and teen genre that made her a household name. "Monte Carlo was a good step for me at the time," she says of last years coming-of-age flick. "But I would never want to do something like that again."

Now that her Disney days are behind her, Selena is at that precarious point in a child stars career where she is trying to grow upboth as a person (she turned 20 in July) and as an artist. "Its frustrating whenever I want the roles that no ones even thinking about me for, and being like, with all these other ones," she says. "Being part of the Disney Channel was such a blessing, and Im super happy with what my show accomplished, but acting is something I would like to take on more seriously." She continues, "I dont necessarily feel accomplished. I want to create a whole different persona when it comes to acting."

She took a giant step in that direction with Spring Breakers, a film about coeds turned convenience-store robbers. When a script from its director, Harmony Korinewho is best known for Kids, the seminal mid-nineties film about New York City teenagers experimenting with drugs, having unprotected sex, and exposing themselves to HIV (in other words, the Antichrist of Disney movies)landed in Selenas lap, the mega teen idol with a squeaky-clean reputation hopped on the next plane to Nashville to read for him at his home. "We went through the entire script," she says. Before leaving, she addressed the elephant in the room: "I said, I know I havent done much and that taking a chance on me is a risk because its like, Oh, a Disney kid. I just want you to know that I would work really hard. I want to do things like this. "

Selena has been working fulltime since she was seven years old and scored a role on Barney & Friends. In 2007, when she was offered the lead in Wizards of Waverly Place, Selena, her mother, and her stepfather uprooted from Grand Prairie, Texas, to L.A. Shes since released three albums and a perfume and partnered with Kmart on the fashion line Dream Out Loud.

"Im so bipolar," she says of her juggling act. After focusing almost exclusively on acting for the past year, Selena contends she is more than ready to jump back into the studio to begin work on her fourth album. "Its going to be differenta little older but still really fun," she says. ("Older" is a running theme for Selena these days.) Theres been talk of collaborations with Fun and longtime pal Taylor Swift, but if Selena had her way, theres another name shed throw into the ring. "Who I would die to work with, but I dont think he ever wouldI dont even think hes doing music anymoreis Justin Timberlake," she says. "Just cause I love his music sooo much."

One cant help but wonder how the other Justin in Selenas life might feel about such a partnership, but its an interesting choice, considering that Timberlake is one of the few teen stars whos been able to cross over into the adult arena with incredible success. Like Selena, J.T. has also dipped his toes in fashion. "Thats all year, every year," Selena says when I ask about Dream Out Loud. "I love doing it, and Im super proud of it."

As she steers her career into a new, more grown-up phasecomplete with glam red-carpet looks starring the likes of Versace and Marchesathe question begs whether Selena has aspirations of making a similar leap with her designs. When I bring up Mary-Kate and Ashley Olsen, who have defied celebrity-designer odds with their highfashion line The Row, Selena responds, "I definitely dont think Im ready for that. Its a whole other market that feels way more intimidating." She adds: "Ive never been comfortable with saying, s a top that Im going to sell for $350, and its just a T-shirt. " Her hesitancy to promote anything too unattainable extends all the way to her closet. "I get sent things that are really nice, and Im like, This is cute, and I look at the tag and its $200," she says. "Im like, Oh my gosh, people probably think I buy it, and I dont. Its really weird."

Selena will be the first to admit that she may be outgrowing some of her younger fans in terms of her body of work, but its important to her that she remain accessible in terms of lifestyle. (While Bieber has famously rented out the Staples Center and helicopters for their dates, such lavish overtures have never been Selenas style.) And for all her talk of adulthood, the one area in which Selena doesnt seem to be in any hurry to grow up is her romantic life. Of her relationship with Bieber, she admits, "Its really fun. Im lucky." But shes quick to add: "Im 20. I dont take anything in my personal life too seriously. I have great friends and a solid group of people I love. I feel like everything else will come organically." In other words, just because her peer Miley Cyrus is engaged and shacking up doesnt mean Selena is in a hurry to walk down the aisle. "Marriage and all that other stuff I think will happen once I feel accomplished in every other aspect of my life," she says. In the meantime, shes still happily living at home. "I have a small condo on top of my parents house. Im a little behind!" she adds, laughing. If by "behind" she means going against the Hollywood grain, Selena is perhaps more mature than she realizes. Uphill battle or not, she seems well equipped to handle the road ahead.