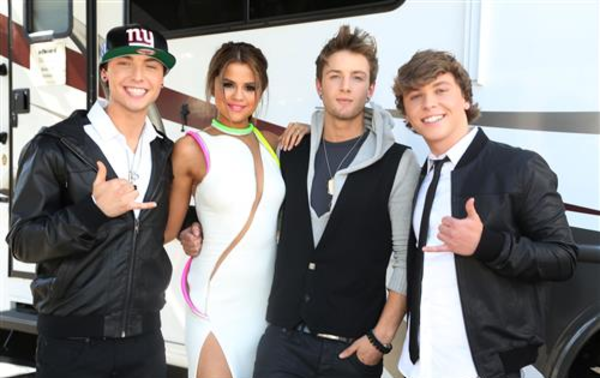 (May 23, 2013) X Factor breakout band Emblem3 announced today that they will join Selena Gomezs worldwide Stars Dance tour as the opening act of the tours 41 North American dates. The dates, which will mark Emblem3s first extensive North American tour, kick off Aug. 14 in Vancouver, BC and continue through cities across the U.S. including Boston, Philadelphia, Houston, Los Angeles and Chicago before wrapping in St. Louis on Nov. 27. Tickets for all dates are on sale now at Ticketmaster.com.

re so psyched to be touring North America and Canada later this year, hitting a bunch of cities our fans havent seen us in yet, said Emblem3. ve been looking to get back out and couldnt think of anyone more dope than Selena to do it with. Gonna be a fun ride!

The bands current single Chloe (Youre The One I Want) debuted in April and is available digitally at http://smarturl.it/e3chloe. The summer jam, described by The Hollywood Reporter as a mix of sugary pop confection and a Sublime-inspired beach vibe, was co-written by Emblem3 and Savan Kotecha, Kool Kojak and Peter Svensson. Emblem3 celebrated the singles release with the fan driven Back 2 Cali roadtrip, a free tour where the band visited 9 cities voted on by fans. That tour followed a string of shows throughout February and March that sold out in under a minute, and saw Emblem3 adding multiple tour dates to their itinerary due to overwhelming demand from fans.

Emblem3 - Brothers Wesley and Keaton Stromberg and lifelong friend Drew Chadwick are currently in the studio at work on their debut album, which is being executive produced by award winning songwriter and producer Savan Kotecha (Maroon 5, Usher, One Direction). The album will be the first release on Mr Kanani, Savan Kotechas imprint on Syco Music released through Columbia Records in Summer 2013.

Emerging recording artist Christina Grimmie will also join the tour on its North American dates. The nineteen year-old previously opened for Selena Gomez and The Scenes 2011 U.S. and Canadian tours and spent much of 2012 in the studio with writers and producers such as Toby Gad, Lindy Robbins and more after her independent EP reached #2 on iTunes in June 2011. Christina boasts an impressive 2.1 million YouTube subscribers, 1.7 million Facebook fans and more than 350,000 Twitter followers and is ready to take her career to the next level.

Selena fans have been in a frenzy since she premiered the single Come & Get It from her forthcoming album and announced her global touring plans. Tickets were in such high demand that an additional show was added in London.

I couldnt be more excited to tour again but this time around the world, said Selena. This has been such an interesting few months. My music has grown and I want my fans to see a new side of me. Cant wait to see yall on the road!

As an artist, Selena has already sold more than 10 million singles in the U.S., along with three RIAA-certified top-ten debuting gold albums, and three #1 Billboard Dance Singles. Her last album, When The Sun Goes Down with Selena Gomez & The Scene was released June 28, 2011 and was certified gold in November of that year.

Check out all the tour dates on the Events page.